A number of our opinionated readers have ruled that the BMW CS concept resembles the Dodge Charger. The mid-size Dodge Avenger also shares styling cues with its showroom sibling, so by transitive relation, the Avenger looks like a futuristic BMW coupe. Can we get an amen? Okay, maybe that’s a stretch, but if the aggressive grille and the curved rear haunches don’t make the Avenger look like a rear-wheel-drive car, at least it looks like it wants to be a rear-wheel-drive car.

The Avenger is essentially identical to the Chrysler Sebring sedan, but we prefer the Avenger’s appearance. Powertrain options consist of a 173-hp, 2.4-liter inline-four; a 189-hp, 2.7-liter V-6; or a 235-hp, 3.5-liter V-6Â­—all with automatic transmissions. The lesser two engines get four ratios, and the 3.5-liter comes with a six-speed box and adds the R/T badge.

The Avenger is comfortable for four, and in a pinch, five fit easily. Rear-seat passengers will feel closed in, though, as the sheetmetal of the rear doors is right where you’d rather look out the window. Overall, the Avenger’s simpler interior is preferable to the clutter of the Sebring’s.

Fortunately, the Avenger’s powertrain performs better than the Sebring’s. The 7.3-second 0-to-60 time is good enough for first place against our last mid-size-sedan comparo group [“Familial Four-Doors,” February 2007]. Repeated stops from 70 mph to standstill induce quick brake fade, but the 189-foot distance is about average. As for fuel economy, our test car averaged an SUV-like 17 mpg.

The Avenger still trails the Honda Accord in refinement and driving enjoyment, but it’s a solid effort. Given our choice of options, we’d stick to front-wheel drive and maybe even opt down to the 2.7-liter engine, which is more attractive on fuel economy and value.

This content is created and maintained by a third party, and imported onto this page to help users provide their email addresses. You may be able to find more information about this and similar content at piano.io

Sours: https://www.caranddriver.com/reviews/a17012054/2008-dodge-avenger-r-t-awd-short-take-road-test/
See all deals for a Dodge Avenger near me.
Please enter your ZIP code: 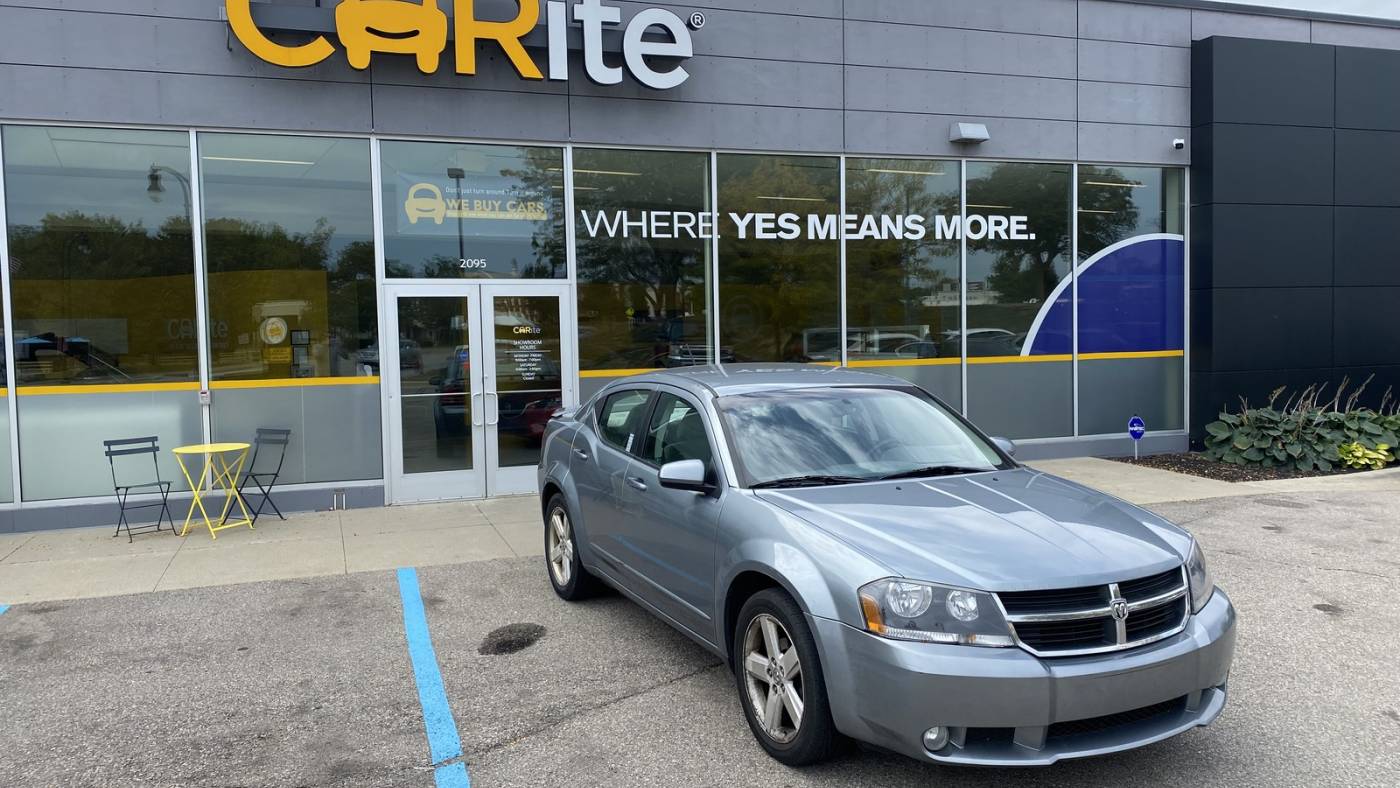 The Dodge Avenger is a front-wheel drive, mid-sizedsedan that was marketed by Dodge. The Avenger made its North American debut in 1994 as a two-door coupe that was produced until 2000. The model name was reintroduced to the market as a four-door sports sedan starting in 2007.

The 2014 model year marked the end of Avenger production as the mid-sized models for both the Dodge and Chrysler brands were consolidated into the new 2015 Chrysler 200[1] while Dodge received the new compact Dart.[2]

Introduced as a two-door coupe in North America, the Dodge Avenger was built from 1994 to 2000 in a similar size and price class as the Dodge Daytona, which was discontinued in 1994.

The Avenger was built on a 103.7 in (2,634 mm) wheelbase and used either a 2.0 L inline-four engine (the Chrysler 420A) or a Mitsubishi-designed 2.5 L V6. The four-cylinder was coupled to either a five-speed manual transmission, shared with the Mitsubishi Eclipse and Eagle Talon, or a four-speed automatic. The V6 engine was only available with the A604 automatic transmission.[3] The Avengers featured a fully independent double wishbone suspension and variable-speed rack-and-pinion steering.

Trims included the Highline base model (V6 among other options made standard in 2000) and the ES.

Standard were 16-inch wheels and the license plate was moved from the decklid to the rear bumper. The front and rear fasciae were redesigned. A Sport model was introduced (in addition to the base and ES). The Avenger Sport package consisted of exclusive 16-inch aluminum wheels and a body-color spoiler. This appearance package was available on the base model.

A body-color rear spoiler, P215/50HR17 tires, and 17-inch cast-aluminum wheels were added for the ES. The V6 is also standard for the ES, as well as rear disc brakes.

Next-generation driver and front passenger airbags are added, as well as a new exterior color: Shark Blue. The V6 engine and automatic transmission are standard on all models in mid-year, as well as several options. An antilock braking system (ABS) was used in all ES models to 1999.

In 2000, the V6 and automatic transmission combination was made standard on all Avengers, and ABS was made an "option" for ES models. The four-cylinder engine was discontinued for 2000. Standard features, that had previously been optional, included power windows and locks. Base models added cruise control and 4-wheel disc brakes. ES coupes now come with standard leather upholstery, keyless remote entry, and a power driver's seat.

The coupe did not achieve high sales numbers, so in 2000 the Avenger was discontinued. It was replaced by the Dodge Stratus coupe for 2001. This model was also made at the former Diamond Star plant by Mitsubishi, using the Eclipse platform and architecture, though the Stratus sedan was engineered and built by Chrysler.

The Dodge Avenger nameplate was reused in February 2007 as a 2008 model year[4] sedan to replace the Dodge Stratus, whose coupe version had replaced the original Avenger in 2001.

The Avenger was officially unveiled at the Paris Motor Show on September 28, 2006, as a concept car. It was launched in Europe and was sold in the United Kingdom, filling a gap in the Chrysler range that was left by the Neon's demise four years earlier. It was also launched in Australia, although with only the 2.4 L engine. The Avenger was discontinued in that market in 2010 due to slow sales. The 2007-2014 models were sold widely in New Zealand.

In the US, the Avenger was launched with a 30-second television advertisement, "Tuned Up", that debuted Sunday, March 4, 2007, during NHL hockey, an ad in which a lab technician discovers he can play "Smoke on the Water" by Deep Purple on the Avenger's transmission. Another television spot likened the Avenger to the "superhero" vehicle for the everyman, depicting a driver piloting his Avenger through Gotham-like streets and alleys, speaking to the MyGig entertainment system in distinctly Batman-reminiscent tones, to arrive home, pull into a two-car garage, and open the rear door to a sleeping child in the rear car seat.[7]

According to some reports, the Avenger, along with the redesigned Chrysler Sebring, shares a DaimlerChrysler/Mitsubishi Motors platform called JS, which used the Mitsubishi GS as a starting point. The base engine in the SE and SXT trim levels was the 2.4 L GEMA I4 naturally aspirated "World Engine", a joint venture between DaimlerChrysler, Mitsubishi, and Hyundai. Additional engines included an optional 2.7 L V6 in the SXT and a standard 3.5 L V6 in the R/T trim level. In addition to the 2.4 L World Engine and the V6s, export vehicles were offered with the 2.0 L naturally aspirated World Engine, as well as a 2.0 L turbocharged diesel (Pumpe-Düse) made by Volkswagen.[6] As a 2008 model, the Dodge Avenger came to showrooms in February 2007.

Features on the new Avenger included optional heated/cooled cup holders and Dodge's new "Chill Zone", a feature that comes standard on all Avenger models, which can store up to four 12-US-fl oz cans in the glove box and chill them to 40°F.[8]

The Avenger competed directly with the Chevrolet Malibu and Ford Fusion, with the 2007 and later Chrysler Sebring being aimed at the higher-priced American cars such as the Mercury Milan, Pontiac G6, and Saturn Aura.

In the 2009 model year, like its Caliber, Charger, Grand Caravan, Journey, and Nitro models, the "AVENGER" badge at the trunk lid's left was repositioned to the right side to make way for "DODGE" at the left.

Following Fiat's takeover of Chrysler Group, marketing of the Avenger was discontinued in the United Kingdom, but sales continued in the Republic of Ireland and Western Europe until late 2009. This new version continued with SE and SXT trim levels and is not badged the same way as North American or the South American versions, although sales continued there until late 2009 following Fiat's takeover of Chrysler Group.

For the 2011 model year, the Avenger received its first major overhaul since its 2008 reintroduction. Exterior changes include slightly revised sheet metal with a new crosshair grille displaying the new Dodge logo on the lower right corner of the grille, a sleeker bumper cut design, and standard LED combination taillights. Changes to the interior are more noticeable with a completely redesigned dashboard and instrument panel featuring an available 6.5-inch navigation/media center screen. Higher-quality soft-touch plastics for dashboard, door, and trim panels replace the old materials, which were criticized for their poor fit and finish quality, as well as being unpleasant to the touch. The seats receive better cushioning and higher-grade upholstery. Two-tone interior color combinations were available.[9]

Mechanically, the 2011 Avenger came standard with the existing 173 hp (129 kW) 2.4 L GEMA I4, although it was now paired with a six-speed automatic, as well as the option of the previous four-speed. Also available was the new 3.6 L Pentastar V6, which generates 283 hp (211 kW) and 260 lb⋅ft (350 N⋅m) of torque. The suspension was revised to improve handling and ride quality.[9] Trim level designations were replaced by Express, Mainstreet, Lux, and Heat models.[10] 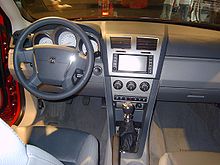 The 2008 to 2013 Avenger, also sold as the Chrysler Sebring from 2008 to 2010, and the Chrysler 200 from 2011 to 2013, received an overall "Good" rating by the IIHS indicating no significant injuries. In the small overlap test, the car received an overall "Acceptable" rating due to marginal dummy kinematics and slight intrusion into the passenger compartment. In the side test, the Avenger earns a "Good" rating, however, rib fractures would be possible for the driver. In the roof strength evaluation, it earns a "Good" rating, as well as its head restraints and seats.

The discontinuation of the Dodge Avenger was announced by the automaker in early 2014, along with the end of the Chrysler 200 convertible model.[30] The final 2014 model year Avengers were produced during first quarter 2014.[31]

The first-generation Dodge Avenger body style was widely used in the National Hot Rod Association and earned the most prominence driven by Darrell Alderman and Scott Geoffrion from 1994 to 2000 as the Dodge Boys.[32]

The Avenger replaced the Charger as Dodge's car for the 2007 NASCAR Nextel Cup Season. It appeared in Dodge Avenger grille, headlights, and taillights as the standard "spec" Car of Tomorrow (CoT) model.[38] It got its first win with former Formula One driver Juan Pablo Montoya in the 2007 Toyota/Save Mart 350 at the Infineon Raceway.

In 2008, the Dodge CoT appearance was changed back to the Charger model.