“T-CLIPS” is no ordinary clipped wing Taylorcraft. Originally a stock 1939 Taylorcraft, this is the only clipped wing T’craft in the world currently flying airshows with an original size engine. Airshow pilot Erik Edgren refers to this as “Twistin It Old School”. SIG is proud to team up with Erik and offer a new R/C model of his one-of-a-kind airplane. Designed for electric power, the new
SIG T-CLIPS EP is a pure aerobatic delight. It’s not meant to be an exact scale model, but more of an everyday no-frills flying field favorite. This balsa ARF features a semi-symmetrical airfoil and strong light weight construction. Put in a “40” size brushless motor with a 4S battery pack and you’re favorite new takeoff style will be straight up. Loops, rolls, snaps, and spins are routine with the T-CLIPS and the basis for more advanced 3D style maneuvers.

Yup, they've gone and done it. OSMW now has a biplane kit. Actually, they're gonna have two, but more on that later.

This is the first of our Sunday Fighters. The original Sunday Fighters were the brainchild of Ken Willard back in the early 1970's. His were small, .049 powered 3-channel models and proved quite popular. Now, we've taken this idea, enlarged, and re-engineered them to make them as much fun to build as they are to fly. There's a bit of Bristol, and maybe some Spad, and for good measure you might detect some Nieuport. So we refer to this one as the Bristol Spadport.

Fast, but not too fast. Maneuverable, but not tricky. A snap to build and surprisingly rugged compared to most. You should see them take evasive maneuvers in Dog Fighting. Evade with snap rolls into spins, Immelmann turns and a loop. OSMW's radio-controlled Sunday Fighter airplane kits just might be the most fun you've had in a long time.

Whether you choose to power your Sunday with electric or glow power, we've got you covered. Glow engines can be mounted side, inverted or even upright with a little modification. Electric motors can be mounted using the included Motor Box which will help space your motor to the proper distance.

Premium USA Hardware Included in each Old School Model Works kit is a premium hardware package. We only source our hardware from brand-name, USA manufacturers to guarantee the best quality.

Dual Ailerons Mounted under the lower wing, these two pre-cut aileron hatches make it easy to install the aileron servos.

WEB-LOCK Construction There's nothing else like it. Build our wings, straight and true - with a minimum amount of fuss.

Bolt On Main Gear Bending your own landing gear is hard. So that's why we include pre-bent main landing gear wire ready for you to assemble.

Front Hatch Held in with magnets, this xtra hatch gives you easy access to batteries or fuel.

Included Motor BoxFor electric power, we include the pieces to build this electric motor mounting box.

o Pushrods (two 5" for ailerons, two 20" for elevator & rudder, one 9" for throttle if glow powered)

Received mine yesterday, pre-ordered it at the Toledo show with high hopes it will be as nice a plane as the prototype and typical of SIG, IT IS! There are a few flaws I have to point out, most of which can be easily addressed, such as wrinkles and dents in the covering, and a few that may not be so easy.

First off, Very well packed, no box damage as you usually see on ARF's, and each part is nicely packed and protected. So far the instructions(what I have read) are clear and precise so should be a quick build.

I test fitted the major parts, wings, tail, cowl, and they all fit very well. The wing joiner is an aluminum tube and fits snug in each wing panel, the right panel is a bit tight, but it goes in with a twisting motion easy enough to not be a concern. Once joined, the joint between the wings is barely noticeable. It fit nice and tight to the fuse. the tail, which was the part I noticed right away on the prototype at Toledo did not disappoint, the fairing for the fin is really well done, and other than a slight wrinkle on one side, looks really nice. Over all there are very few wrinkles on the entire plane, only spot of concern is a dent on one wing panel which I am pretty sure a shot with the heat gun will take right out since this is NOT monojoke, but the good stuff.

The only two items that I notice that were not up to snuff, the front windshield has some scratches on the inside, and the paint on the cowl has blemishes, I believe from being wrapped up before fully cured. Hoping that rubbing compound can smooth it out.

Now for the unboxing. Pictures dont do it justice, its a beautiful airframe. 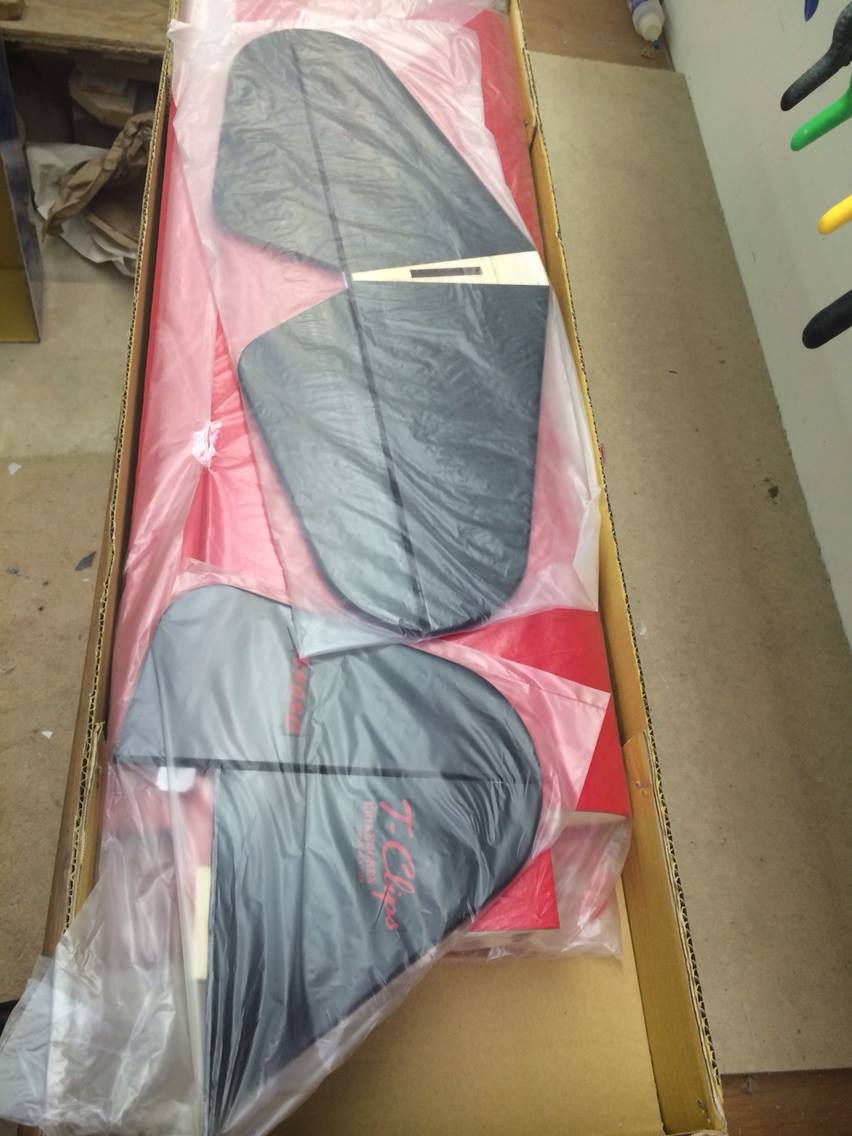 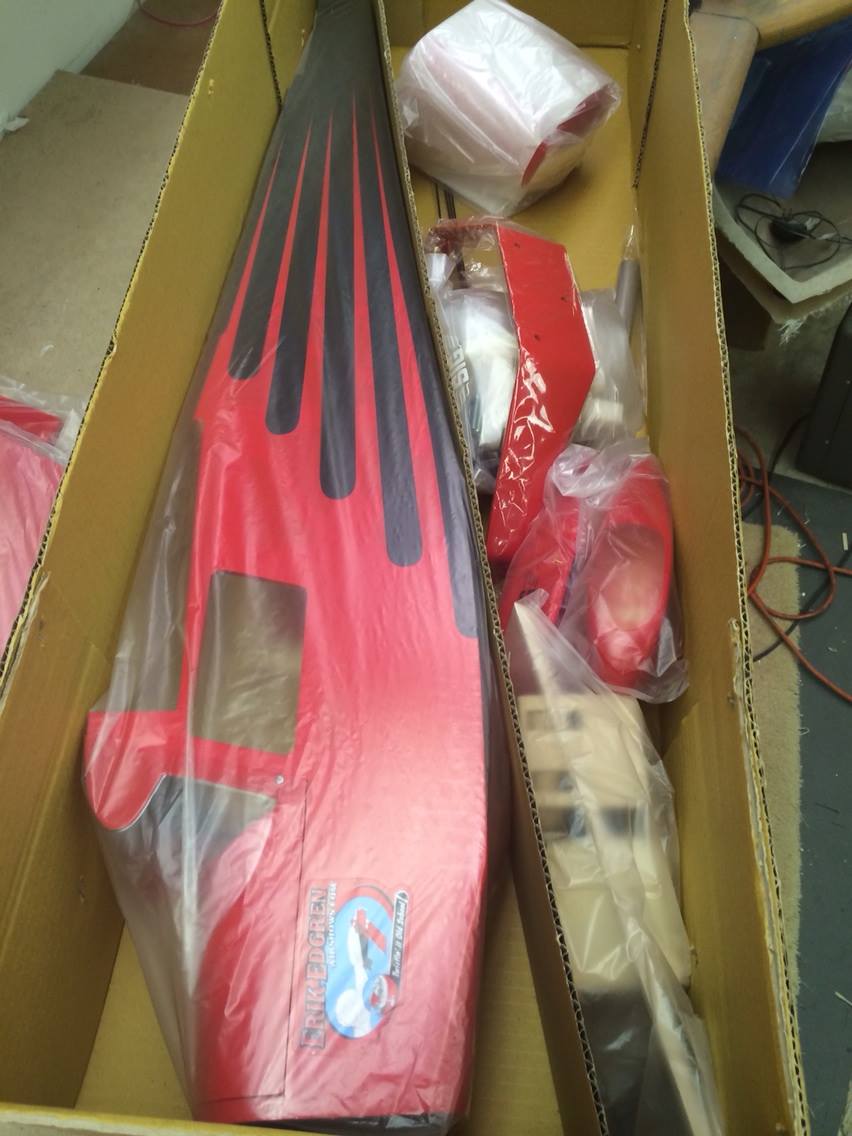 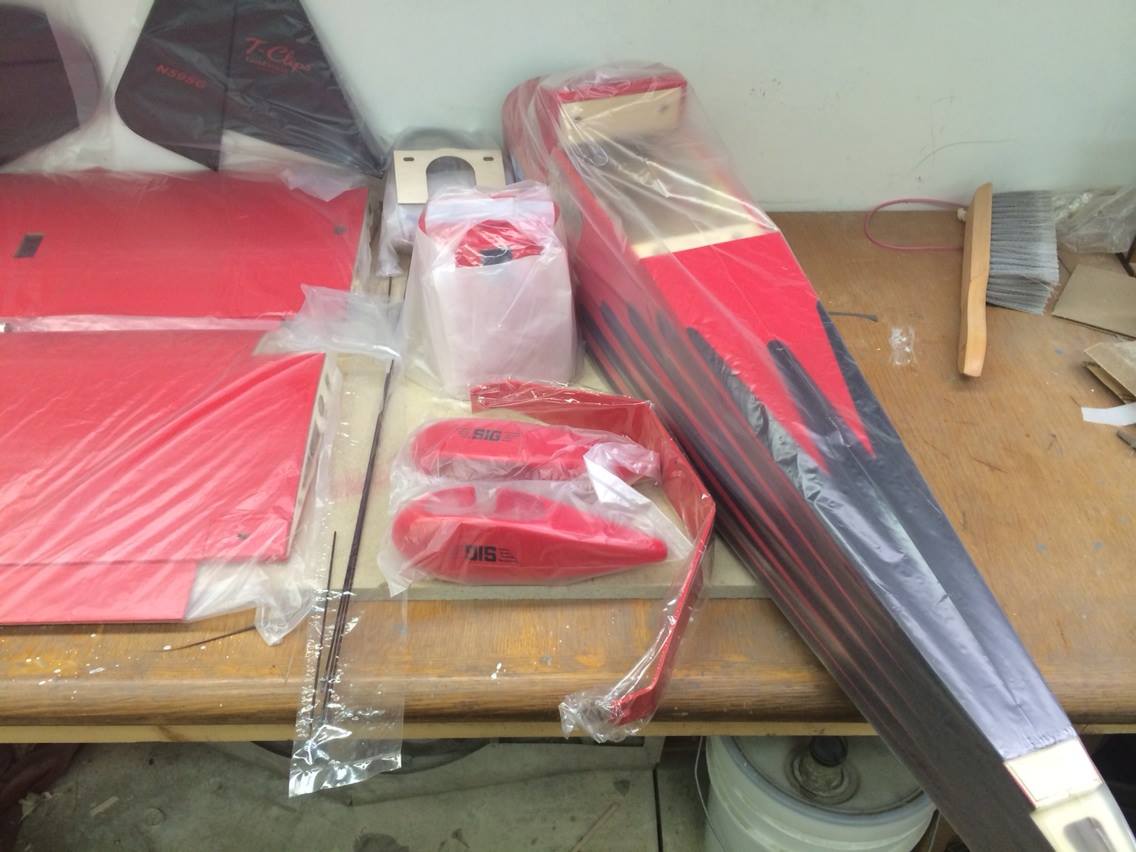 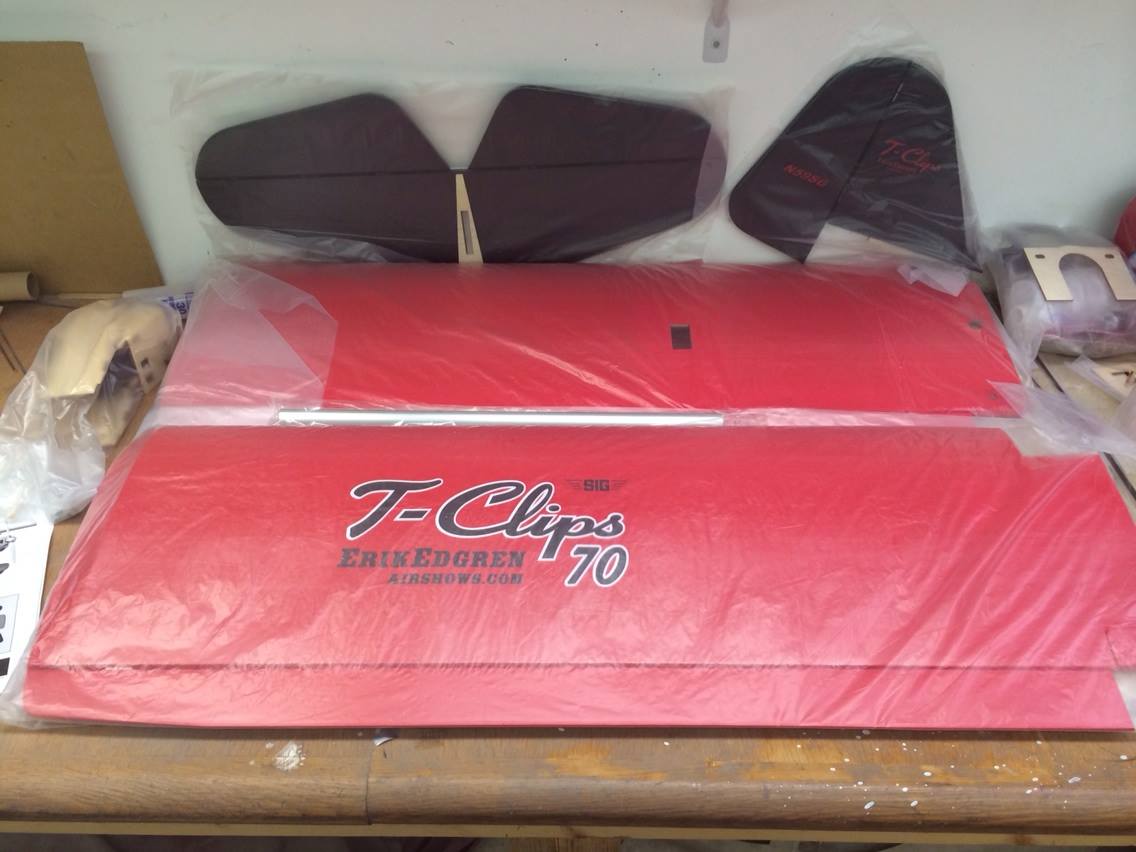 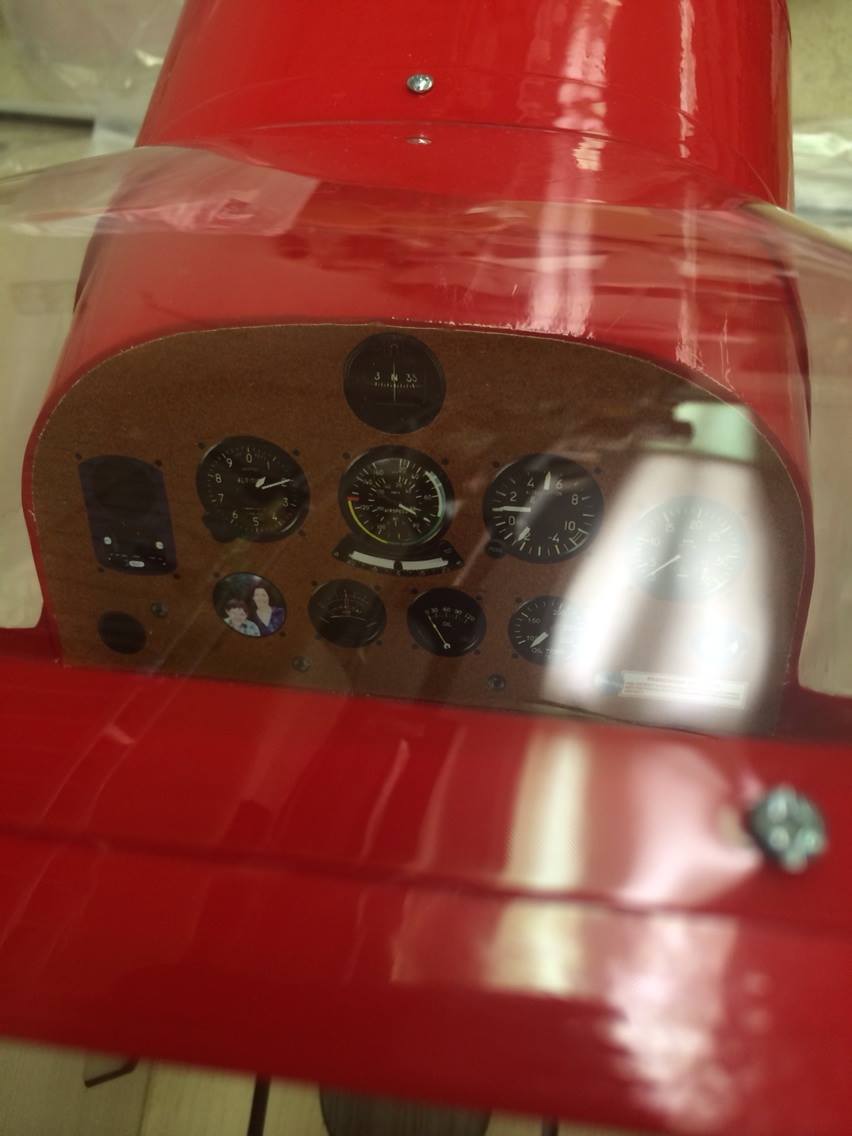 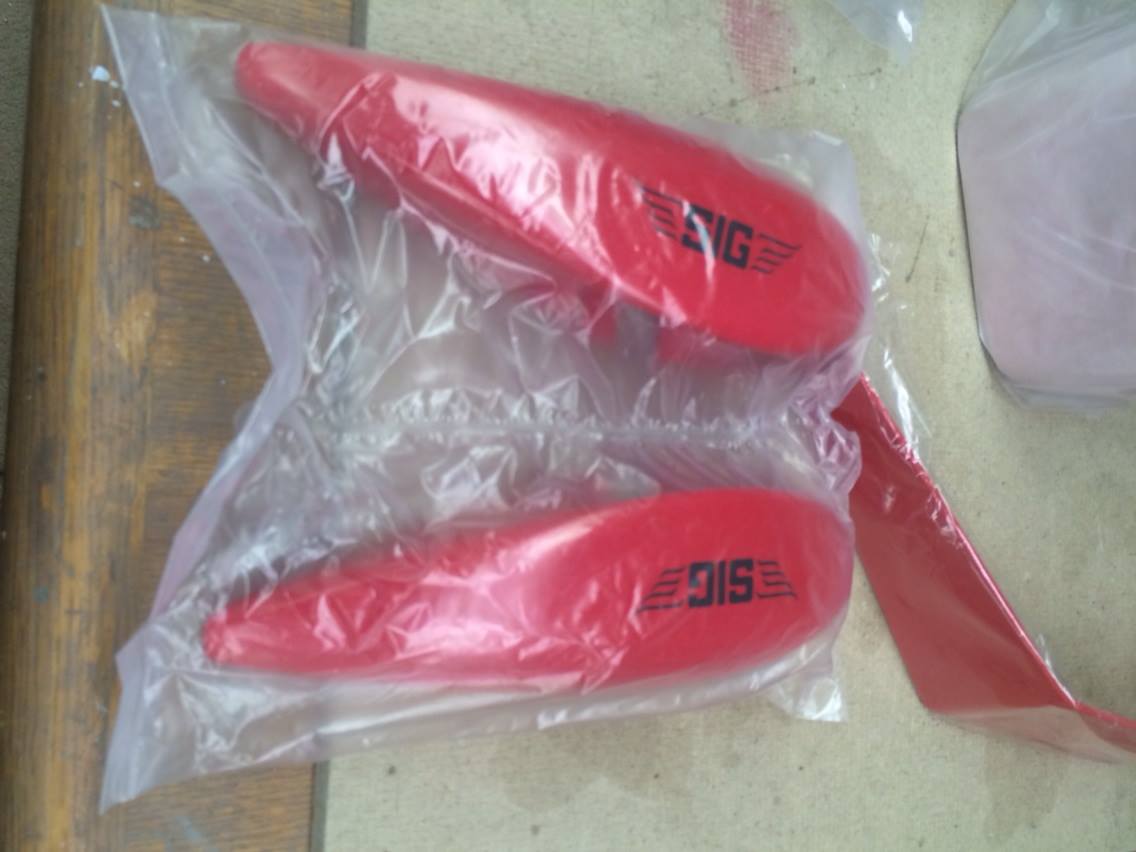 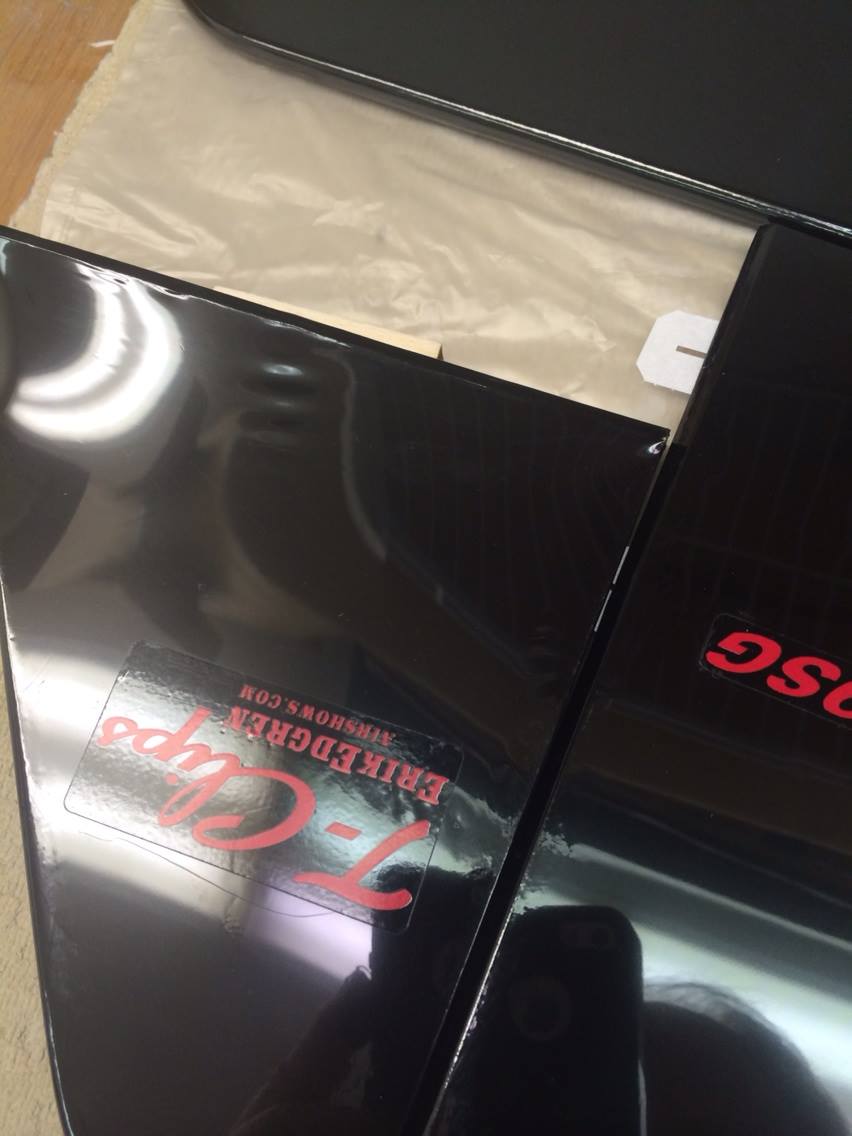 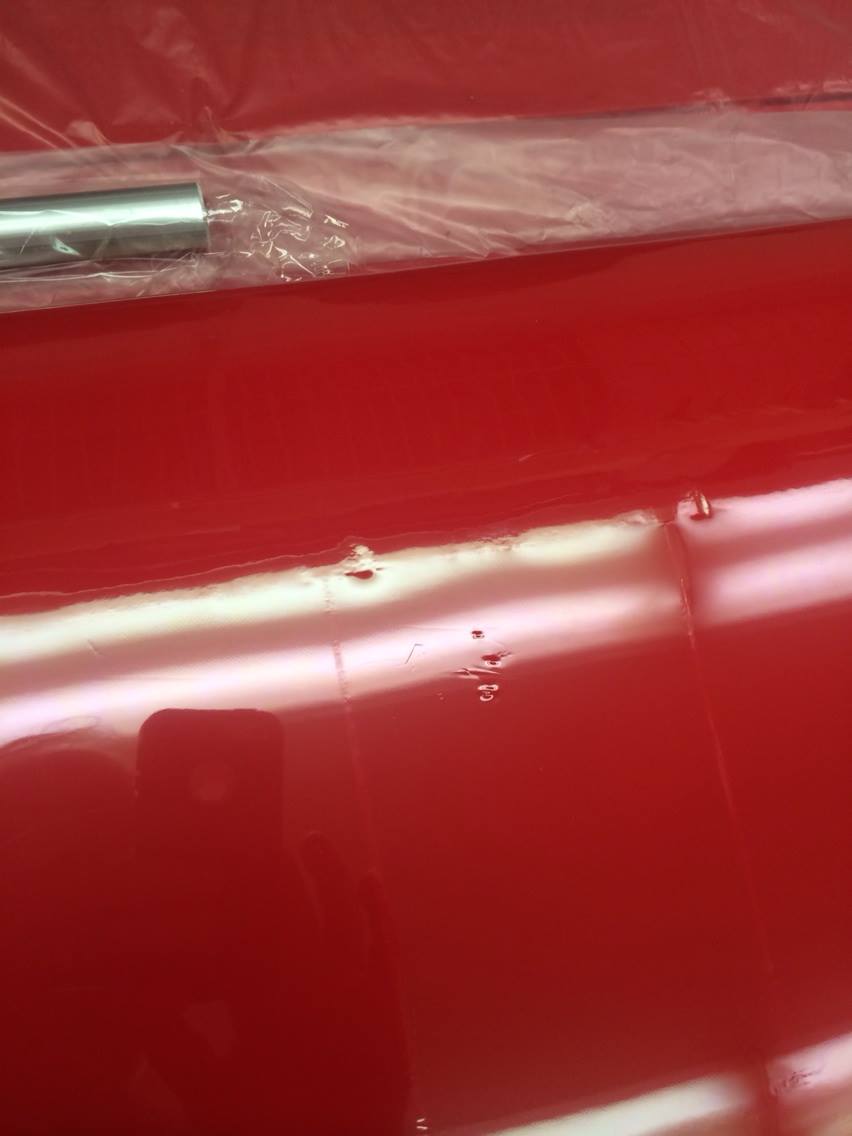