"Come on Sammie! It's not going to hurt you!" I said pointing  at the broken down building ahead.

"How do you know? And since when have you called me 'Sammie'?"

"Since I need something from you. Now hurry up!" I said running forwards.

"Dean. I- Wait!" He ran after me and I kicked the door and it fell over backwards.

"Why not we do it all the time." I said pulling out my gun.

"True but you could have just unlocked it!" He pulled out his knife

"Not as fun." I walked around the corner and saw a machine that looked like a jacked up tower.

"What the hell..." I heard sam's voice behind me

"Wow" I said I kicked it and it glowed blue and some of the lights turned on. "Crap..." I backed away and bumped into someone.

"Over here..." He was behind the machine.

"Oh my lord!" I screeched jumping

"Are you praying to my father Dean?"

"Gabriel's here?" Sam said picking his head out from behind the machine

"Oh...uh cool.😅" Sam said disappearing behind the machine again. "Got it!"

The machine glowed blue again and started to buzz.

"Oh pretty!" I heard Gabriel's voice. He was hanging from a railing upside down biting down on a lollipop.

"What the hell!?" I said jumping back

"No..." He stroked the underside of my chin and walked away Cas following him

"What do you see in him?" I turned towards Sam

All poses referenced from pyjama-cakeseriously guys, go check her stuff out, its all amazing!

Now onto my headcanons for the GB!Verse

I think Fem!Dean would be EVEN MORE screwed up than her male counter part, due mainly to how she would have been raised by Fem!John(Joan? Joanne?)
Deanna would have been raised with mixed signals on whether or not being feminine was a good thing or not, having F!John believing on one hand that certain aspects of being feminine are necessary in being a woman (Long hair, a lot of make up, being submissive to those in command) but i think like canon John, F!John would also see things like feelings (being submissive to anyone but her, feminine clothing, and maybe if i got to the extreme, being female itself) to be bad.
So because of this, Deanna would dress in more 'manly' clothings, closely resembling Canon!Verse Deans outfits (a little more fitted because her, still got to look sexy as hell) but still keep her hair long and make sure she always has her make up done.

:buletblack: Deanna still sleeps around like dean, but i think due to how society views females sleeping around, she would sometimes fall into slumps and slightly depressing states (until Sammi, and later on Cas come to talk to her, then she immediately pretends that she's fine and confident)

Like Canon!Sam, F!Sam would be constantly clashing with F!John, especially with her views on women. due to being female, i think F!Sam would e able to express her disagreements with F!John via her appearance (she has short hair, in contrast with canon!Sam, and when not hunting(She dresses practical for hunting) she wears a lot of feminine clothing such as dresses and floral print)

F!Sam is an outspoken Feminist, striving for equality amongst sexists.

Cas' name would stay Castiel, because Cas is technically genderless therefore wouldn't be genderbent. Jimmy, however would become a female (Jane? Janey?)

Cas would be the exact same, personality wise.

During the equivalent season of season 8 (in particular, the purgatory parts) Cas' hair would grow out (Incase you cant tell, its like... almost shoulder length.. sorry about my crappy colouring ahah) but unlike Canon!Cas, This Cas would not cut their Hair, keeping it longer (Same goes for endverse)

In reality i want to try and keep al the angels original names, the same way i keeping Cas', but its hard for some (such as Hannah) to be able to.. function properly in human society... but its something they will have to face!</b>

Have you ever heard of Supernatural GenderSWAP? It’s been popular in fanfiction, but it did become a mini-series set in the Supernatural universe.

It wasn’t until yesterday that I’d learned there was Supernatural GenderSWAP. After writing about Raelle Tucker, I learned that she was part of the miniseries, which saw Sam and Dean Winchester become Samantha and Deana Winchester. Kasey J. Heimann and Amanda J. Gilbertson took on the main roles respectively.

For the most part, the series followed the same storyline as the original series. The big difference was the gender of the main characters. Only running for a season over the course of three years, the full Supernatural story couldn’t be told. However, the team did get a chance to show what the first 22 episodes could have been with two female leads.

Gender swapping is nothing new in the fanfiction world. There are plenty of stories where one of the Winchesters becomes female, whether through a supernatural spell or because they are transgender. In other cases, there are stories of one of the Winchesters starting off as female to show how the dynamics could change. There was even a fan film set somewhere in Supernatural Season 4’s timeline to show Sam and Dean Winchester both turn into women and navigate a case in the opposite gender.

However, Supernatural GenderSWAP involves a number of writers and producers from the original series to tell the full story. It’s something no other series has attempted. It goes back to the very start and encourages you to rethink your knowledge about the series.

As I mention, it’s something I’d never heard of until yesterday. While IMDb says there are only 22 episodes, Fool’s Gold Theatre Productions has two seasons worth of material available and it looks like more is planned.

Next: Is Arrow Season 7 the last chance for a Supernatural crossover?

Had you heard of Supernatural GenderSWAP before? Is this something you’ll seek out? Share in the comments below. 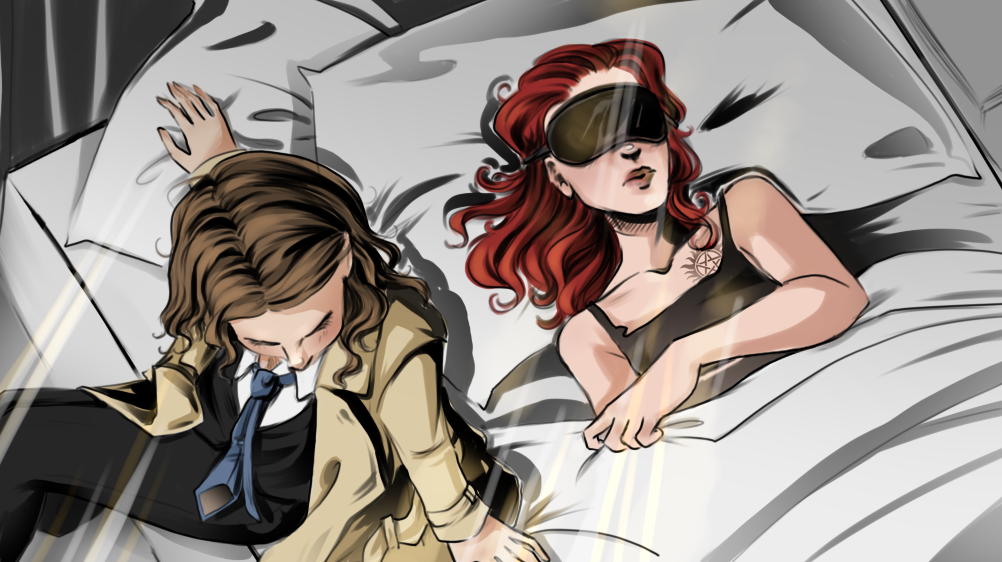 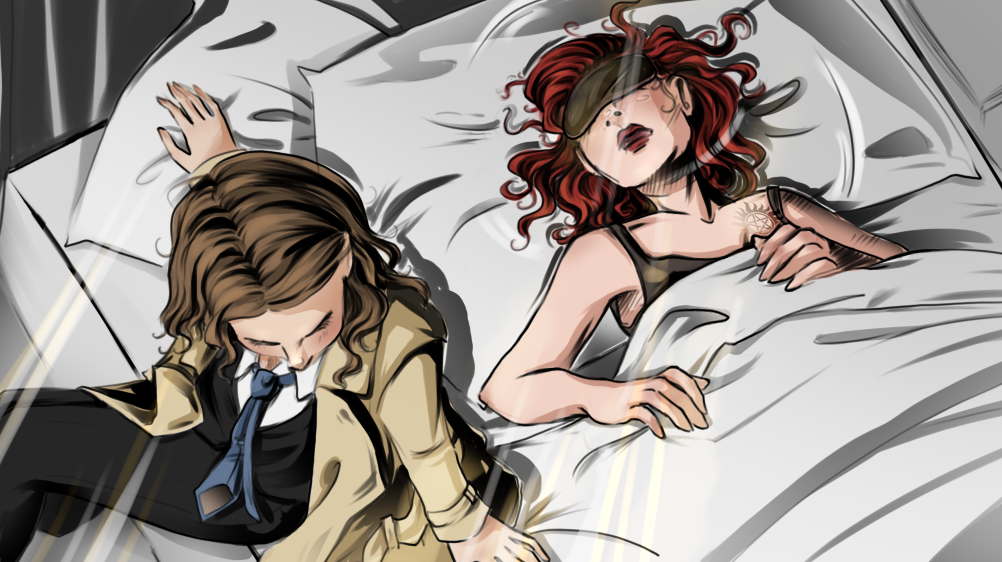 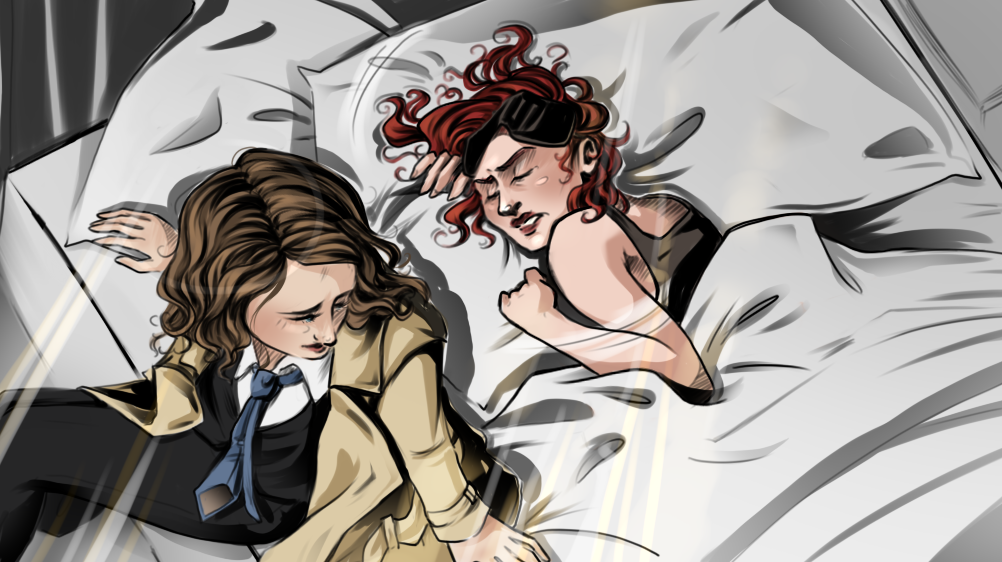 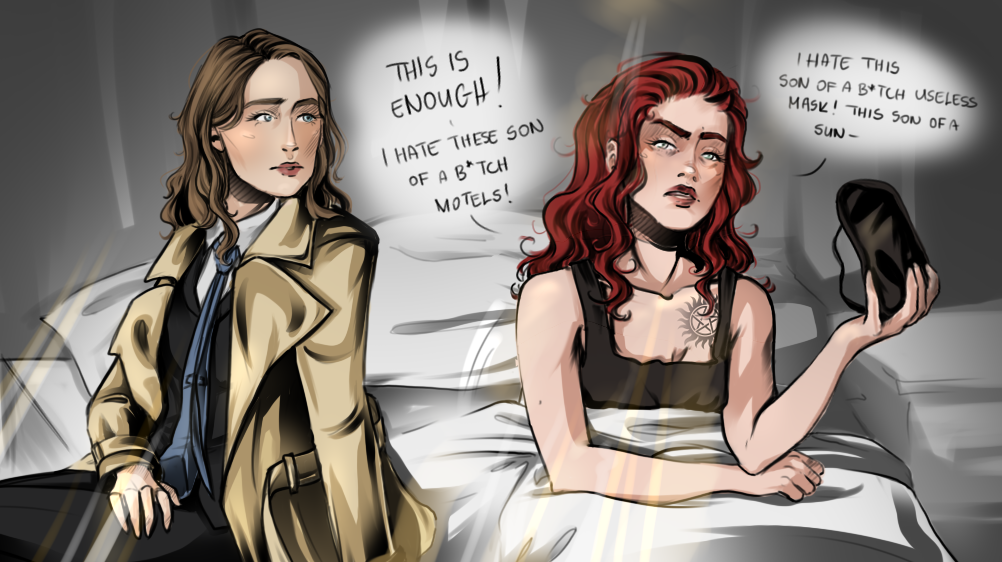 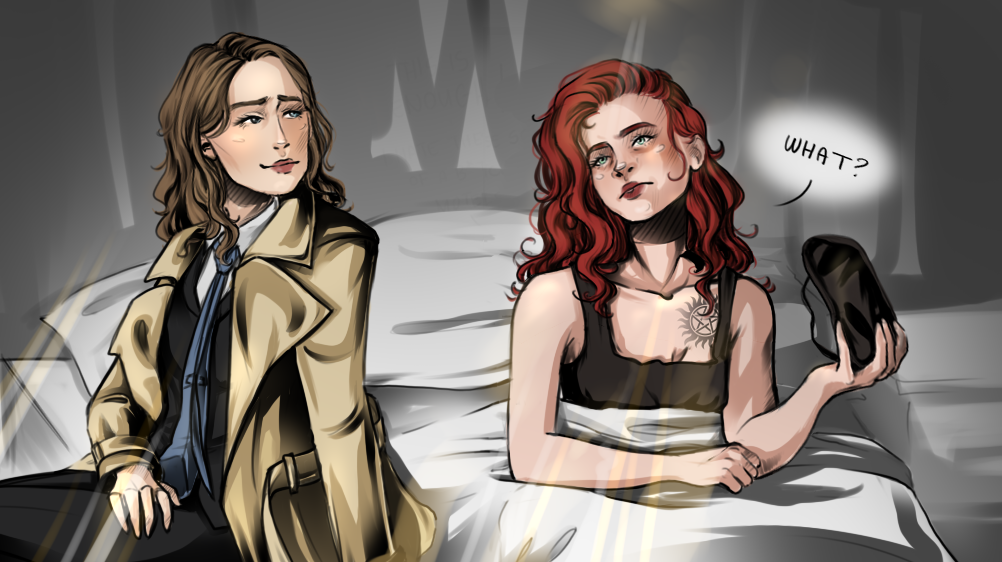 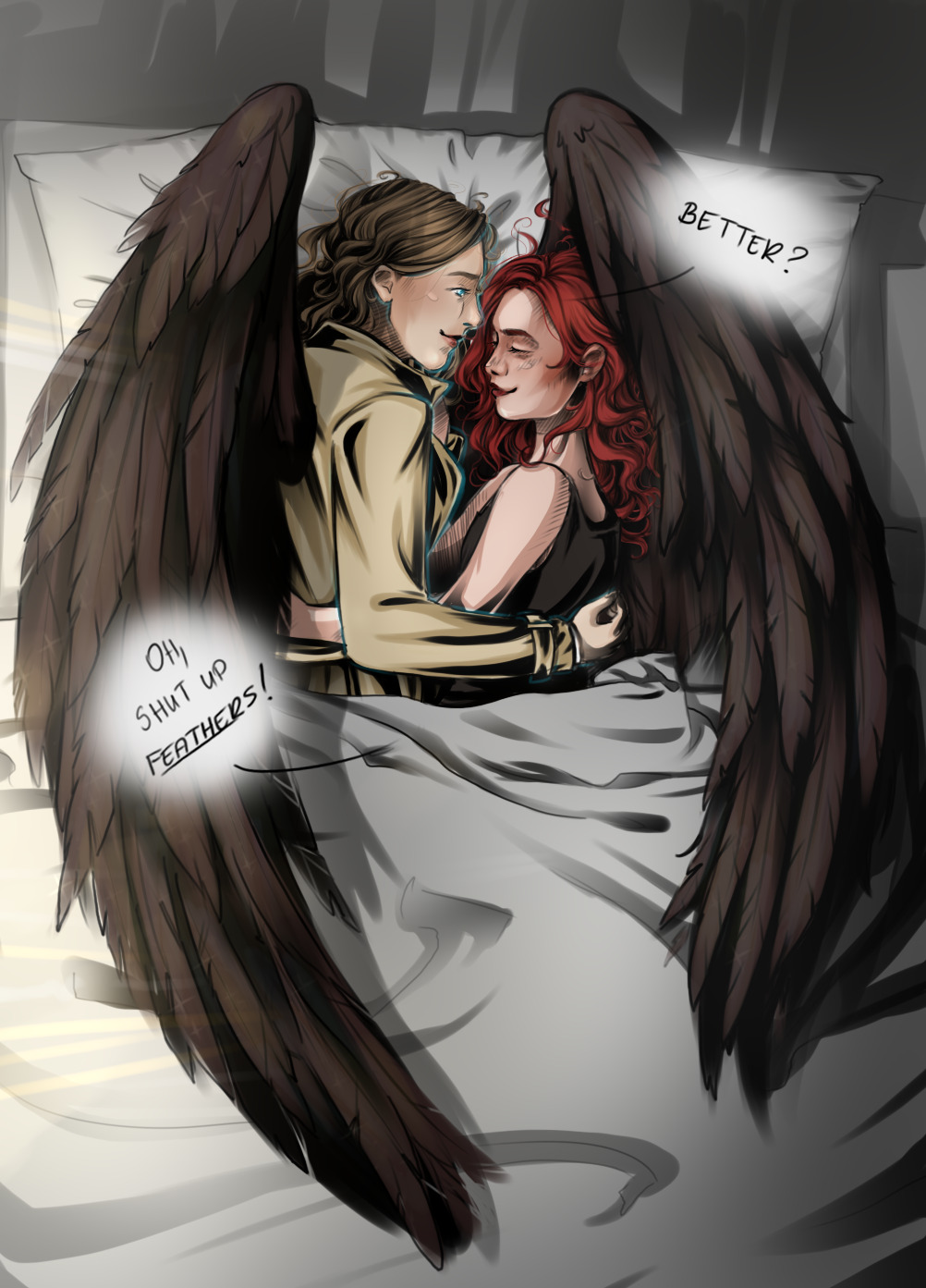 You know these aesthetic sleeping masks are e v e r y w h e r e these days, and my sleeping schedule looks like 'sleep where and when I can' so of course I wanted one. Okay I have a really old white one but that is white and most times my hair dye and white stuffs are not really compatible- so weeks ago I bought one from shein. The cheap ass one to be honest because I wasn’t sure my PTSD ass (don’t ask. problably high school’s fault) could sleep in something like this- and for the first 2 days I HATED it with my whole heart. It was uncomfortable, my nose is too big or my head is too little but I could look under, in daylight it was too transparent, but the worst was nighttime when I got a tinylittlebit panic attack from my claustrophobia (?? I don’t think I have those but who knows with my mental health). So I decided to skip this. ... and then my migraine came in and I realized the rubber band of this mask push my head just in the r i g h t s p o t to don't hurt so much, so now this little shit is my sleeping buddy.

But this drawing was planned way before, when i hated these. x,DDD I totally think Diana would try to get something like this, like I slept in a lot of sunglasses back in the days I travelled a lot and that is not the best... it is okay in car or on a bus but sleeping with sunglasses in bed just the uncomfiest thing ever. Yeah, tried. So getting some cheap sleeping mask probably sounds so good for somebody who is living the hunter type of lifestyle (and probalby she saw Sammy to use these so she wanted to try it too). But these shits are only good for the people who sleep like disney princesses. I ALWAYS take it off somehow at night and most times I found it next to my bed in the morning x,D As we know Diana is an ‘angry sleeper’ and she is even grumpier if she can’t sleep, so for her it is totally useless and I decided to go and do something little with this everyday scene. It was totally accidental but I just love how I positioned Cassie to cover Dee from the harash light even in the first frames. x))

It was way bigger project than I excpected in the first place, I should doodle more maybe than it will be more quick- what do you think of this doodle artstyle? I used the comic styled stuff from the last pics of Cas, I think it really goes well with the doodle formatum. I really loves the clean doodles people use to draw but I am way more chatoic than that... x,D 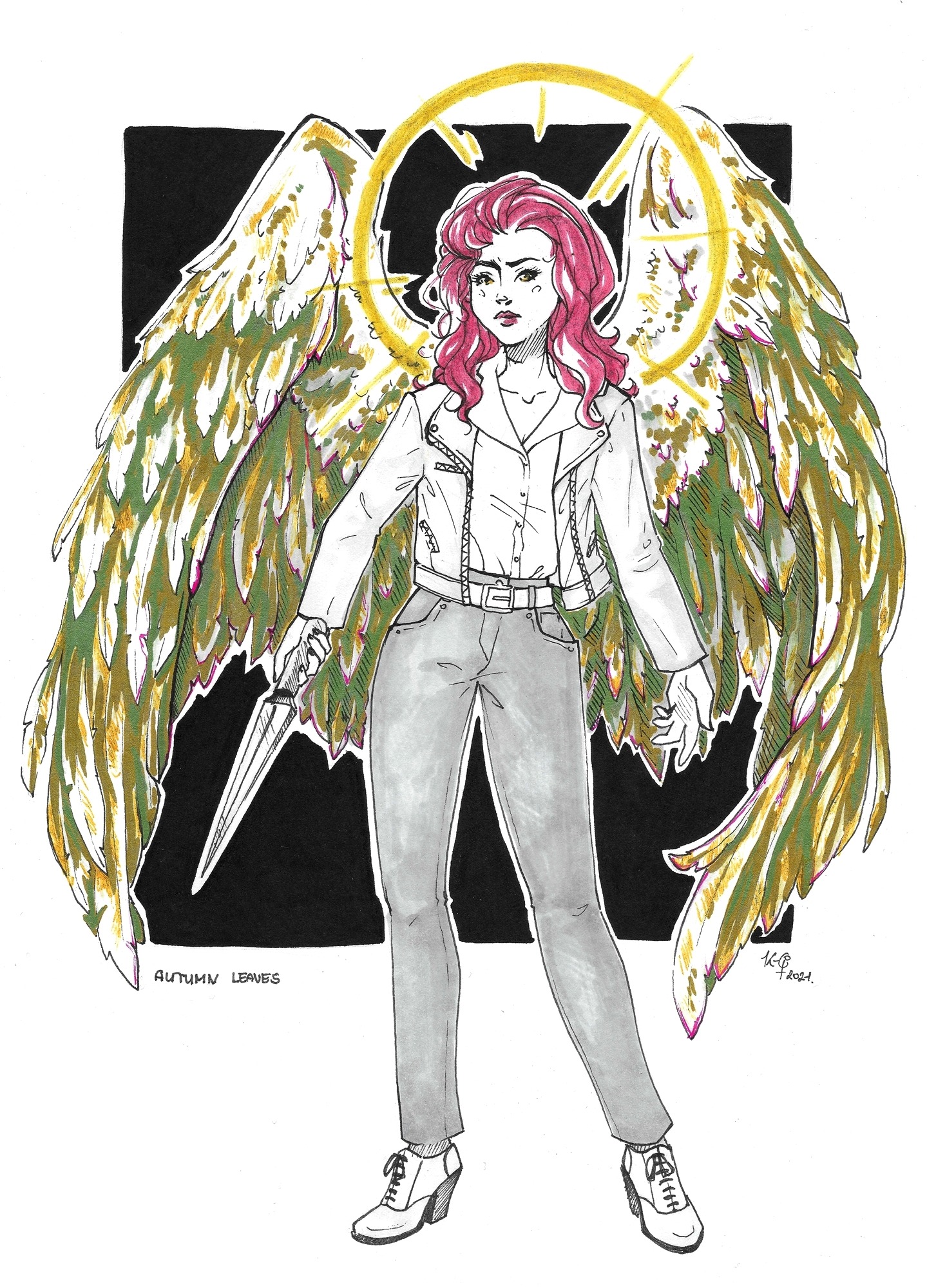 A little early for Inktober, but oh how I missed doodling!

Usually I better like drawing digitally because of the effects, and I really tought I can quit my job and have a free summer to do whatever I want, like drawing. Life happened, I’m still in the business, so my eyes are usually hurts after a workday and most times have no will to watch more screen even to draw. So I looked up some old SupNat themed inktober prompt lists and decided to give it a go. I will totally not finish it in a month, god, maybe I will finish only 5 promt, but still better than nothing and these girls really need some new drawings. (My most drawings are 5-6 years old and that time the story really wasn’t that we made out of it in the last year).

I almost went with a simple autumn picture or the redrawing of this old 4 season’s kingdom x fem!Supernatural drawing, but then remembered I chose rustyreds and browns and olives as our reverse!verse angel!Diana’s feathers what is really like ‘autumn leaves’ for me. So here it is herself, Diana the angel of fahsion disaster. I wanted to gave her some strong ‘50s elegant vibe because somehow she is ‘the Michael’ in this version, but still wanted to give ther the leather jacket so now she looks like a GabexMichael mashup. Your welcome. 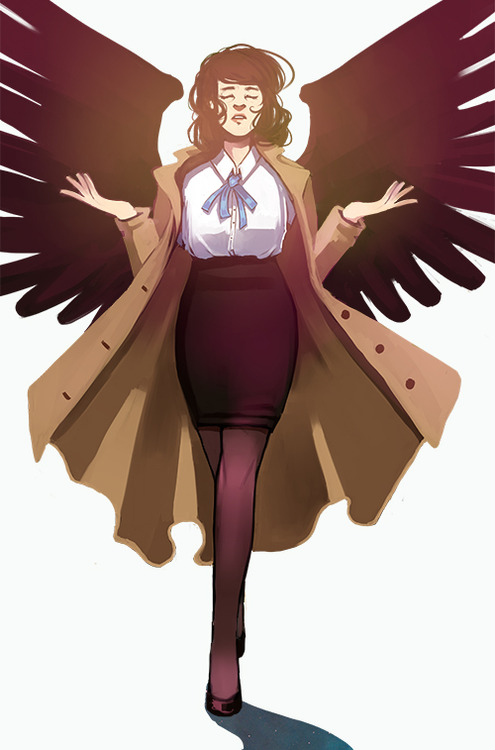 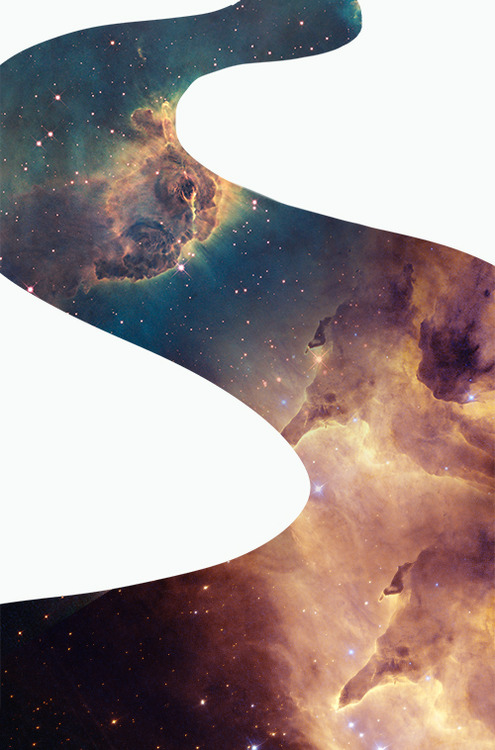 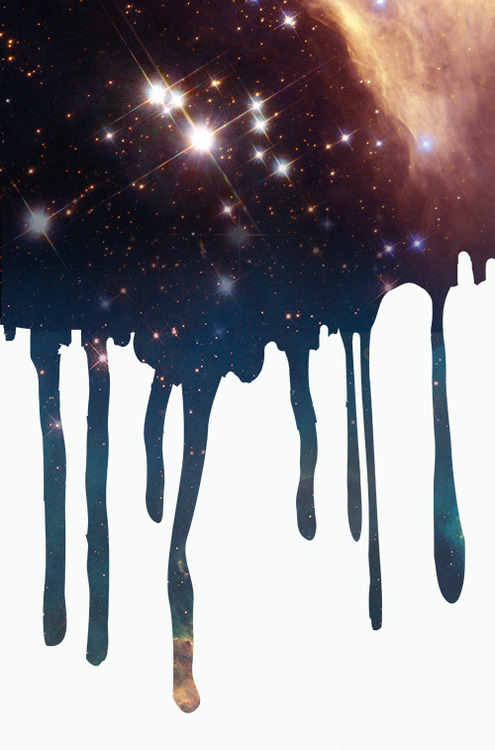 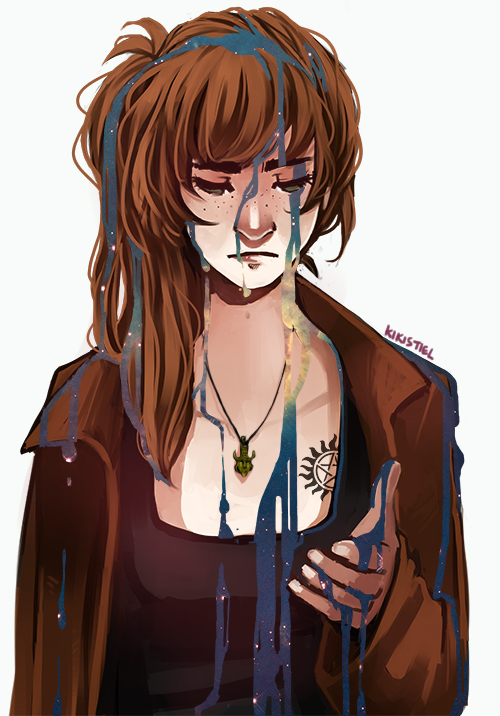 Fan artist Kiki Jenkins flips our expectations on their head with this gorgeous and surprising genderbent piece featuring Dean Winchester and Castiel from TV’S Supernatural.

Genderbending, or genderswapping, is the practice of taking familiar characters and switching their gender. At times, it may be a political statement about the treatment of women in film and TV, and other times, it may simply be a fantastical imagining of a different kind of story.

The illustration begins with a fem!Castiel floating dreamily in a pencil skirt and heels over a winding galactic pathway that stretches downward before reaching fem!Dean, contemplating the scraps of heaven dribbling down her hair.

Jenkins uses the vertical orientation of the piece to create a sense of suspense and anticipation as you scroll down in a wonderful example of a fan artist utilizing the digital medium to guide the experience.

I stumbled across Jenkins' amazing art on her Tumblr, where she has many other genderswapped works. She also has an Etsy shop where she sells prints.

24 best images about genderbend on destiel

team free will genderbend commission by deerazeen on

genderbend supernatural for y all by bakasara on

yes if they did a gender bend thing then

this is the most interpretive fan

supernatural the genderbend anime edition by weivienne on

24 best images about genderbend on destiel

deviantart castiel and cas on

team free will genderbend by nellymonster on deviantart

i am forever approving of this genderbent supernatural pic

2019 subaru outback near me