Creator Luni is a water unit, who has appeared in many Lunime Games. She made her debut in the Future Punkcase in Anime Gachaas a 6-Star Unit. In Anime Arcadeshe has her own mini-game, "Luni Data Tiles". She has since appeared in Gacha Worldas a 5-Star Unit and the main antagonist and boss of Chapter 9's fourth and fifth areas as the thirteenth boss of the game.

Creator Luni also appears in Anime Fidget Spinner and in Gacha Resort as the star of chapter 1, where she gets the player to help finish the resort and later reappears throughout the story.

In Gacha World, her special attack is "Erase All," in which Luni creates a swarm of missiles to attack all enemies, doing Water damage. Her leadership skill is "Time Stop," which delays all normal enemy's cooldown time by 1 turn.

She was created by Luni.

Luni is a young woman dressed in dark and neon blue. Her hair and eyes are also a bright blue in color. Usually she is depicted in a dark hoodie, shirt, shorts, and long striped socks. She tends to have holographic controls around her for her work.

NOTE: Here there be spoilers! Read on at your own risk!

The first time the player battles Creator Luni is the fourth part of Chapter 9 instead of the last part like previous levels. This boss fight here is like the previous boss fights and should be easily beaten.

Afterwards, Luni captures Ellie (The fairy that guided you) and forces the player to choose between giving up and playing a seemingly unwinnable game.

The player must dodge attacks from the sides, above, and below the playing field. They can move left and right and jump. Every hit does one damage, and initially, the player only has one hit point. Throughout the game, Luni will taunt the player, urging them to quit.

The game contains 3 stages with a short break in between each: the first is an empty playing field, the second has a platform in the middle, and the third has two middle platforms. The player must survive all three levels in order to beat Corrupted Luni. When the player dies, they are sent back to level 1.

Every time the player dies, the game "crashes" and resets, only now the player has more hitpoints. Hitpoints will continue to stack with each loss so that eventually the player has enough health to make it through the game, no matter what their skill level is. In theory, it is possible to beat the game by just standing still and racking up hitpoints (though that will take a while). Beating the game allows Ellie to free herself to help you cure Luni of her corruption.

"How should I delete you? Let's go with missiles!" - Creator Luni's skill quote in Gacha World.

"I created this game, It's impossible for me to loose!" - Creator Luni's victory quote in Gacha Resort

"This must be a glitch, I didn't program my defeat" - Creator Luni's lose quote in Gacha Resort 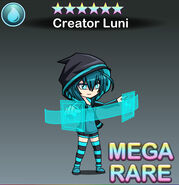 Luni as she appears in Anime Gacha

Luni as she appears in Gacha Resort

Creator Luni as she appears in Gacha Memories

Creator Luni as a plushie 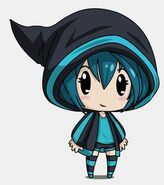 Creator Luni in chibi form as a pet in Gacha Studio

The Corruption is the source of most of the conflicts in Gacha World and Gacha Resort.  A malevolent entity, the Corruption exists across the universes using minions and unwitting pawns to further its destructive aims.

The Corruption was first introduced in this game.  Each place the Gacha Summoner goes within the game has some form of conflict caused by the Corruption.  Many (but not all) of the generic enemies the player fights were released by the Corruption, and all bosses are characters who have fallen to the Corruption in one way or another. The main method used begins with the manifestation of the Blades of Corruption: twin swords that can act as a gateway between the current location and the Corruption’s minions. The Blades serve a second purpose, allowing the Corruption to influence its target.  The target, once corrupted, will often have some aspect of their personality magnified to dangerous and destructive levels. Hallucinations and subtle persuasion reinforce the destructive behavior leaving the victim often unaware that they are corrupted.

In the case of Dream Goddess Yume, the Corruption allied with and/or augmented the god of nightmares, Akumu, allowing him to possess her. After losing control of Creator Luni, the Corruption physically manifests as a character labeled “Final Boss” (spoiler: it isn’t) which the player must fight through chapters 1 through 4 of RNG World.

After the fourth defeat, the Corruption possesses one last character for the final battle, converting Ellie into RNG Goddess Ellie for a special final battle.

Art was drawn was Purorange, an artist for Lunime. Purorange's watermark is on the art but it cannot be seen because of the black backgroundWattpad adds onfor renders and PNG images. 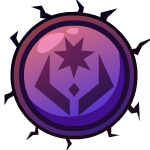