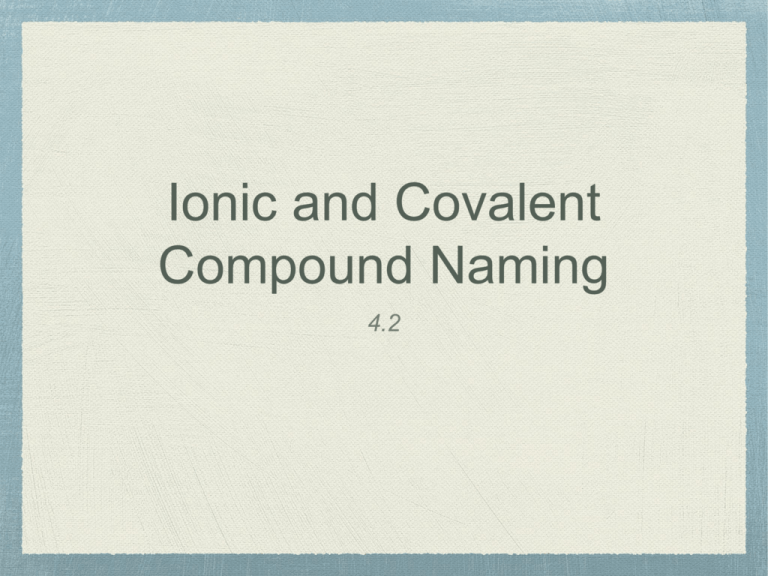 Ionic and Covalent Compound Naming 4.2 Ionic Compounds: - are made up of positive and negative ions arranged in a crystal structure. Covalent Molecules: - are made up of atoms sharing electrons. Name of an ionic compound = cation anion-ide e.g.1: magnesium and oxygen cation anion-ide Magnesium ox + ide Magnesium oxide e.g.2: what is the name of Ca3N2? Ca = calcium; N = nitrogen Drop the end of the anion and add –ide Calcium nitride e.g.3: What is the name of BaCl2? Barium chloride Calcium nitride Remember: positive charges must = negative charges e.g.1: What is the formula for magnesium phosphide? e.g.2: What is the formula for calcium oxide? Calcium is Ca2+ Oxygen is O2– 1 Ca2+ ion &amp; 1 O2– ion Magnesium is Mg2+ Phosphorous is P3– Lowest common multiple of 2 and 3 is 6 3 Mg2+ ions &amp; 2 P3– ions (6 +ve’s &amp; 6 –ve’s) Magnesium phosphide = Mg3P2 Calcium oxide = CaO Examples on whiteboard (unless we get a projector by the time this class comes!): – Lithium nitride – Barium sulphide Multivalent: some transition elements have more than one charge. Roman numerals are used after the metal name to indicate which ion was used e.g. What is the formula for manganese (III) sulphide? This manganese is Mn3+. Sulphur is S2Lowest common multiple of 3 and 2 is 6 2 Mn3+ ions and 3 S2- ions Mn2S3 What is the name for TiF4? Titanium can be 4+ Ti or 3+ Ti Fluorine is F– From the ratio in the formula you can find out it is Ti4+ 1 Ti4+ ion and 4 F– ions Titanium (IV) fluoride are made up of several atoms joined together by covalent bonds The whole group has a + or – charge, not individual atoms. e.g. What is the formula of sodium sulphate? Na+ and SO42– Na2SO4 e.g. 2: What is the name of the compound KClO? K+=potassium, ClO-=hypochlorite Potassium hypochlorite e.g. 3: What is the formula for Calcium nitrate? Ca2+ and NO3Ca(NO3)2 * Note the brackets around NO3 show there are two of the nitrate ions present Prefixes are used before the atom name to indicate the number of atoms in the molecule. Examples: CO = carbon monoxide, CO2 = carbon dioxide Write the most metallic atom (furthest left) first, then add -ide to the end of the second atom’s name What is the name of the molecule Si3P6? Trisilicon hexaphosphide What is the chemical formula for the molecule trinitrogen tetrachloride? N3Cl4 To determine whether a compound is ionic or covalent: Examine the formula Ionic compounds start with a metal or the ammonium ion Covalent compounds start with a non-metal
Sours: https://studylib.net/doc/9780048/ionic-and-covalent-compound-naming
Sours: https://worldwidescience.org/topicpages/n/na+ions+reaching.html

Complete the table below by writing the symbols for the cation and anion that make up each ionic compound. The first row has been completed for you. Ionic compound: Mn2S3, MnBr4, FeF3, CuI

We are asked to determine the ions that make up the each of the ionic compound given.

• Subscripts that are divisible are simplified and subscript 1 is no longer indicated.

The cation of MnBr4 is Mn4+ while its anion is Br-

The cation of FeF3 is Fe3+ while its anion is F-

The cation of CuI is Cu+ while its anion is I-

Write the name for the compound with the formula Mn2S3.

How to Write the Name for Mn2O3

Dell docking station near me