Posted on by Tyler Roberts

Things are about to get ferocious as NERF is taking us back to the age of dinosaurs with some new blasters. The Dino-Squad is here with three brand new blasters that feature dinosaur-themed deco and design. Starting things off first is the new NERF Dino-Squad Rex-Rampage themed after the king of the dinosaurs, the Tyrannosaurus Rex. This blaster is packed with some great features, including motorized fire, removable scope, 10 round clip, 10 dart storage, and will come with 20 Elite darts. The T-Rex design is excellent, with a green and orange that will dominate any NERF battle. Up next is the Dino-Squad Tricera-Blast blaster that brings the Triceratops to the battlefield. This blaster features a break-open loading and has a 3 dart chamber. This Dino-Squad blaster comes with 12 Elite darts, and the Tricera-Blast also has a 12 dart onboard storage. With great Triceratops sculpts, NERF fans will be able to bring the horns to the battle with this bad boy. The last Dino-Squad blaster that NERF has introduced is the Stage-Smash pistol. This single-shot blaster is ready to take aim in the prehistoric era with a pullback handle. This Stego-Smash blaster will come with 5 Elite darts and will feature a 4 dart onboard storage. The spikey detail on this blaster is nicely executed, and it will be a great side piece for your Dino-Squad hunt.

Each of these dinosaur themed NERF blasters is very well detailed and packed with features. I am a sucker for dinosaurs, and these NERF blasters are very well done, and I can't wait to see them up close. Even though the Rex-Rampage is motorized, the Tricera-Blast blaster features a very amazing design that will be fun for any occasion. Prices for each NERF Dino-Squad blaster are set to release in Spring 2021 with a varying price as well. The Rex-Rampage is the priciest at $39.99, the Tricera-Blast comes in at $19.99, and the Stego-Smash pistol is $9.99. Pre-orders are not live yet, but they will be able to be found here along with other amazing products from Hasbro. 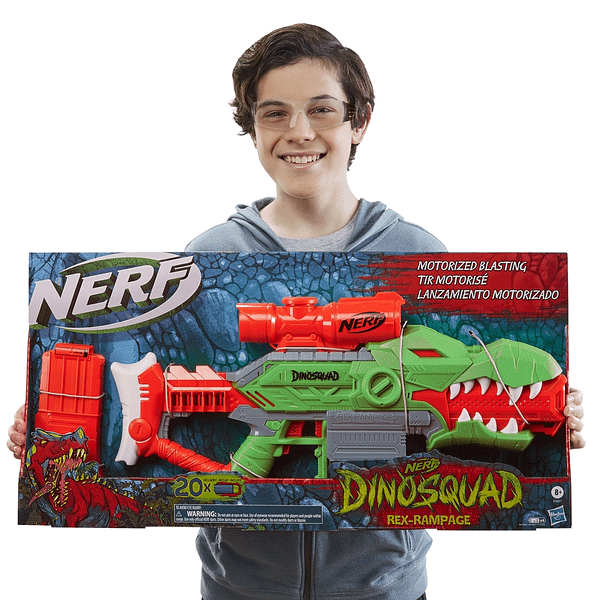 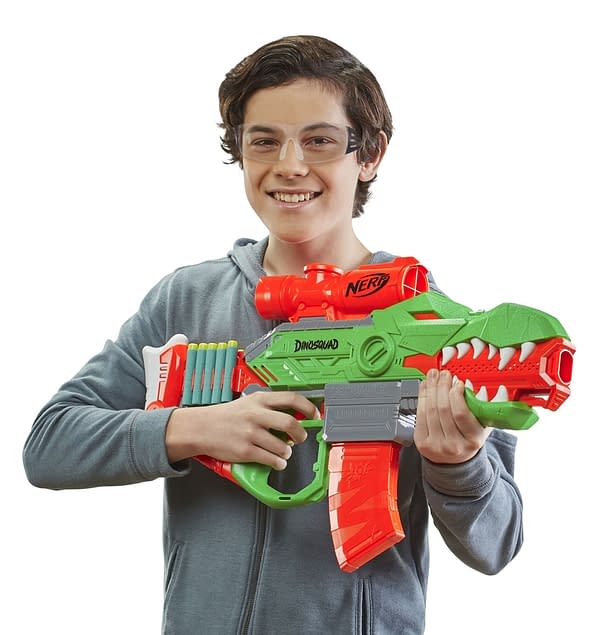 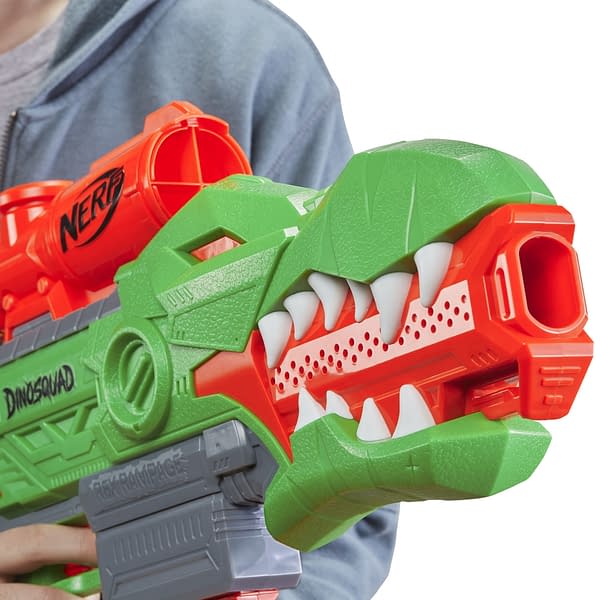 "DINOSQUAD REX-RAMPAGE –(HASBRO/Ages 8 years & up/Approx. Retail Price: $39.99/Available: Spring 2021). Blast into battle with the power of a T-Rex with the NERF DINOSQUAD REX-RAMPAGE blaster! It features an awesome dinosaur design, capturing the look of a Tyrannosaurus Rex dinosaur. Rev up the motor on this motorized blaster and press the trigger to fire darts fast. It comes with a 10-dart clip so you can send 10 darts in a row racing through the air at your targets. There's onboard 10-dart storage on stock to keep backup firepower nearby for reloads. The blaster includes a nonremovable targeting scope to line up your shots. It comes with 20 Official NERF ELITE foam darts that are tested and approved for performance and quality."

The NERF Game Gets Ferocious With The Dino-Squad 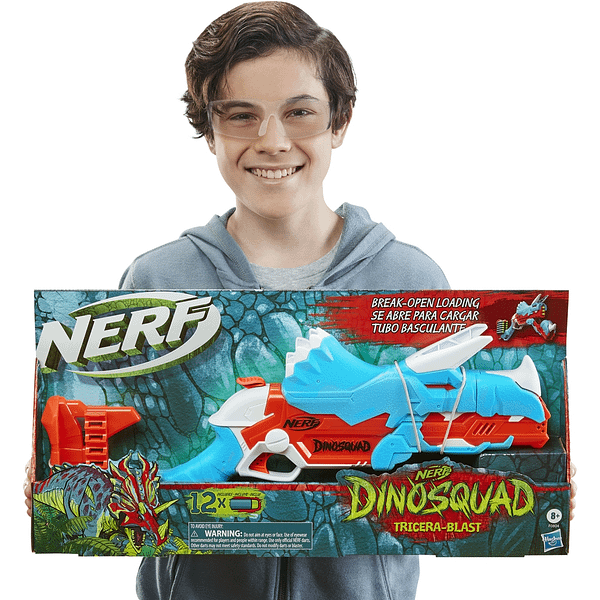 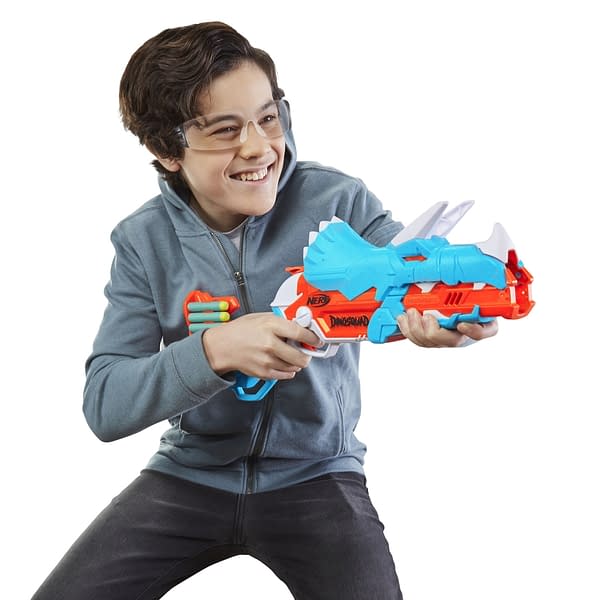 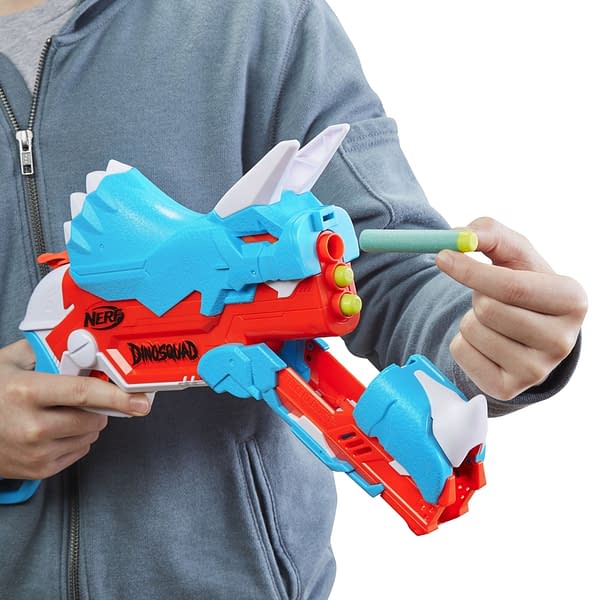 "DINOSQUAD TRICERA-BLAST – (HASBRO/Ages 8 years & up/Approx. Retail Price: $19.99/Available: Spring 2021). Charge into triple-dart action with the NERF DINOSQUAD TRICERA-BLAST blaster! It features an awesome dinosaur design, capturing the look of a Triceratops dinosaur. The blaster has break-open loading and a fun way to open it — push the front horn on the dino's head and the barrel swings down to reveal the dart chamber inside. Load 3 darts and swing the barrel closed. Pull down the hammer to prime the blaster, then press the trigger to send 1 dart flying toward your target. There's onboard 12-dart storage on the stock so you can have backup darts within reach to reload and keep on playing. Includes 12 Official NERF ELITE foam darts that are tested and approved for performance and quality." 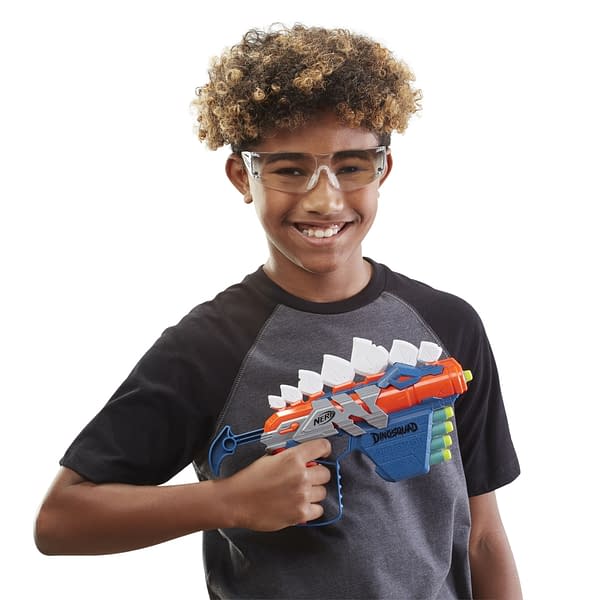 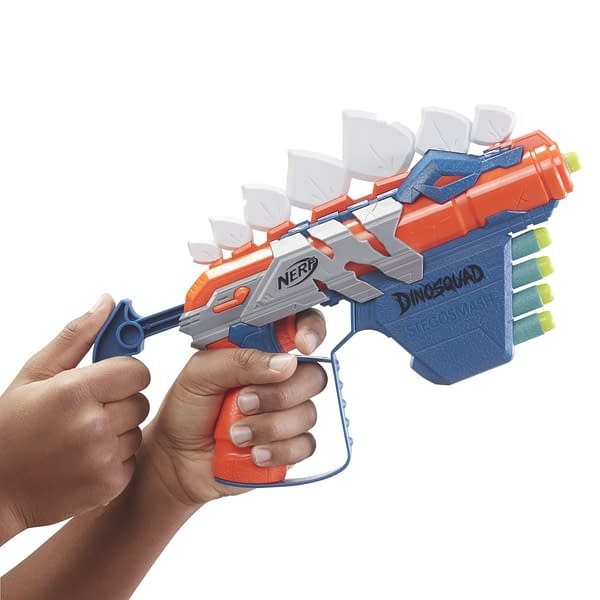 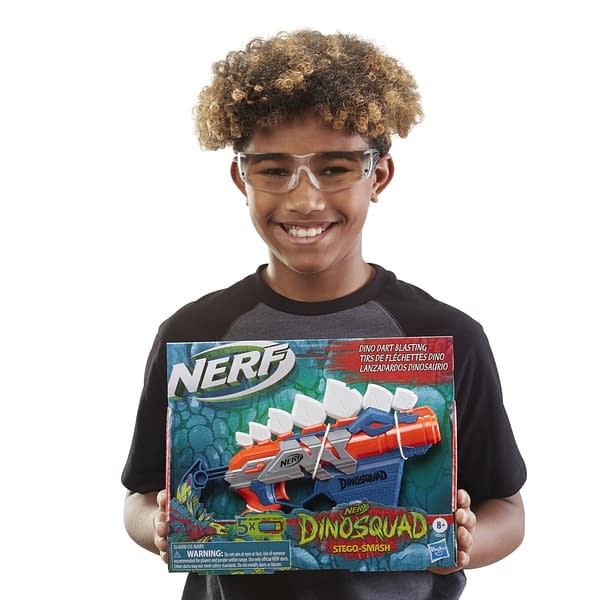 "DINOSQUAD STEGO-SMASH – (HASBRO/Ages 8 years & up/Approx. Retail Price: $9.99/Available: Spring 2021). Stand your ground as dart-blasting defender with the NERF DINOSQUAD STEGO-SMASH blaster! It features an awesome dinosaur design, capturing the look of a Stegosaurus dinosaur. Fire into dino-tastic fun with this single-fire blaster — load 1 dart into the front of the barrel, pull back the handle to prime, and press the trigger to send the dart charging toward your target. There's onboard 4-dart storage on the front of the blaster so you can have backup firepower within reach for reloads. Includes 5 Official NERF ELITE foam darts that are tested and approved for performance and quality." 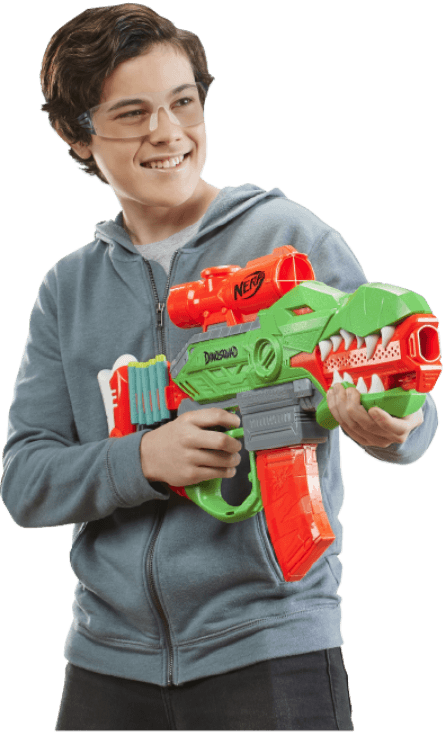 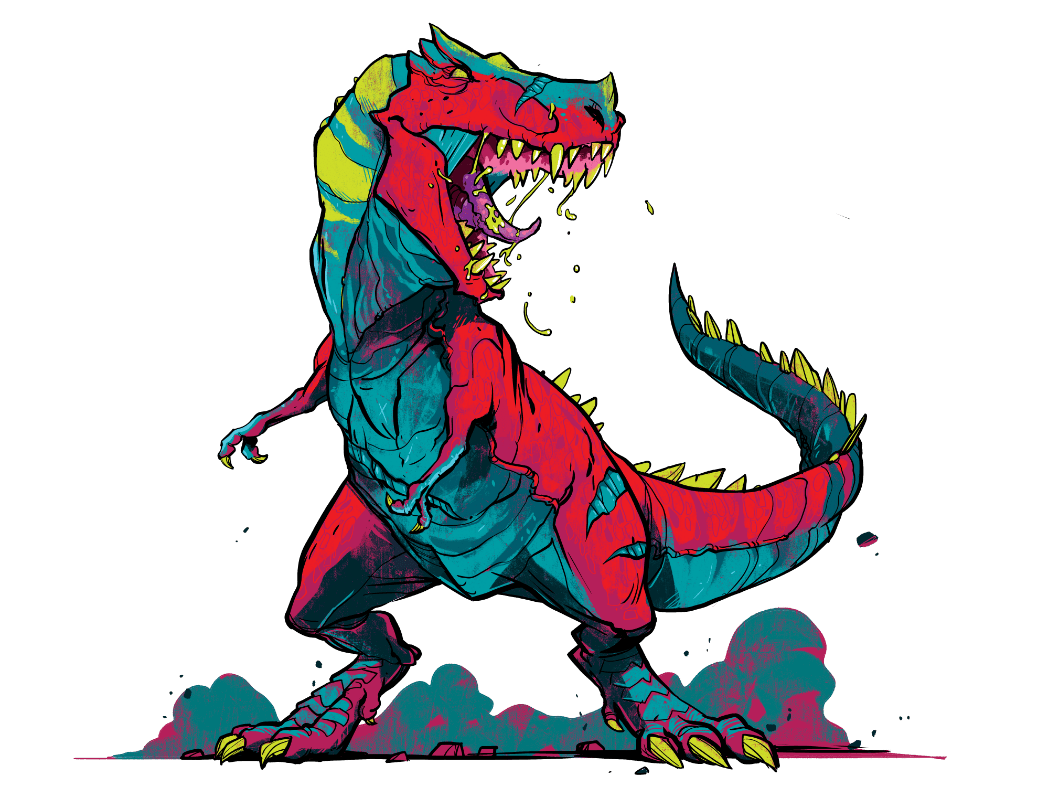 Harness the extraordinary force of the greatest dinosaurs of all and blast into amazing adventures. Gear up for action with Nerf DinoSquad blasters that feature dinosaur-inspired details.

Harness the extraordinary force of the greatest dinosaurs of all and blast into amazing adventures. Gear up for action with Nerf DinoSquad blasters that feature dinosaur-inspired details.

There’s a real simple formula for selling to kids: grab any toy imaginable, combine it with A-list dinosaurs, and you’ve got an instant hint. Nerf has finally done the math and thundering out this spring is its new DinoSquad line of dart and water blasters, which are just about the best honor an extinct species could ever hope for.

Leading the herd is the only motorized option in the new DinoSquad line: the Tyrannosaurus Rex-inspired Rex-Rampage Blaster. It gobbles up four AA batteries and spits out 10 darts at a time that can be quickly loaded using swappable magazines—although just one is included. For $40 the Rex-Rampage also includes 20 Nerf Elite darts, dart storage on the stock, and an integrated targeting scope, and it also finally adds credence to the theory that T.rex was a hunter, not just a scavenger.

G/O Media may get a commission

If you prefer your dart blasters with less of an appetite for batteries, the Triceratops-inspired DinoSquad Tricera-Blast blaster uses a manually primed hammer to fire one dart at a time. But instead of using swappable magazines, pressing the triceratops’ horn causes the dino blaster’s lower jaw to swing down, allowing three darts to be loaded at a time. For $20 it comes with 12 Nerf Elite darts with storage slots for all of them on the stock, and unlike the herbivore triceratops, which only craved plants, this blaster has a hunger for annoying roommates, family members, and pets.

The most affordable entry in the new DinoSquad line is the Stegosaurus-inspired Stego-Smash blaster, featuring a single-shot design that’s loaded by stuffing a dart down what appears to be one of the thunder lizard’s nostrils? A handle on the back primes the $10 blaster’s firing mechanism, while four of the five included Nerf Elite darts can be stored on the front of the blaster’s grip.

Despite Jurassic Park’s claims that the Dilophosaurus could spit debilitating poison at its prey, the real dinosaur was lacking those abilities. It’s a fact we’re happy to ignore because the $15 DinoSquad Dino-Soak blaster might be the best dino-to-blaster conversion in the entire line. Like Hollywood’s version of the dinosaur, this Dilophosaurus can blast targets with whatever you fill its tank with, so every pump of the handle can leave your friends feeling like Dennis Nedry, but without the fear of being eaten afterwards.

For more, make sure you’re following us on our Instagram @io9dotcom. 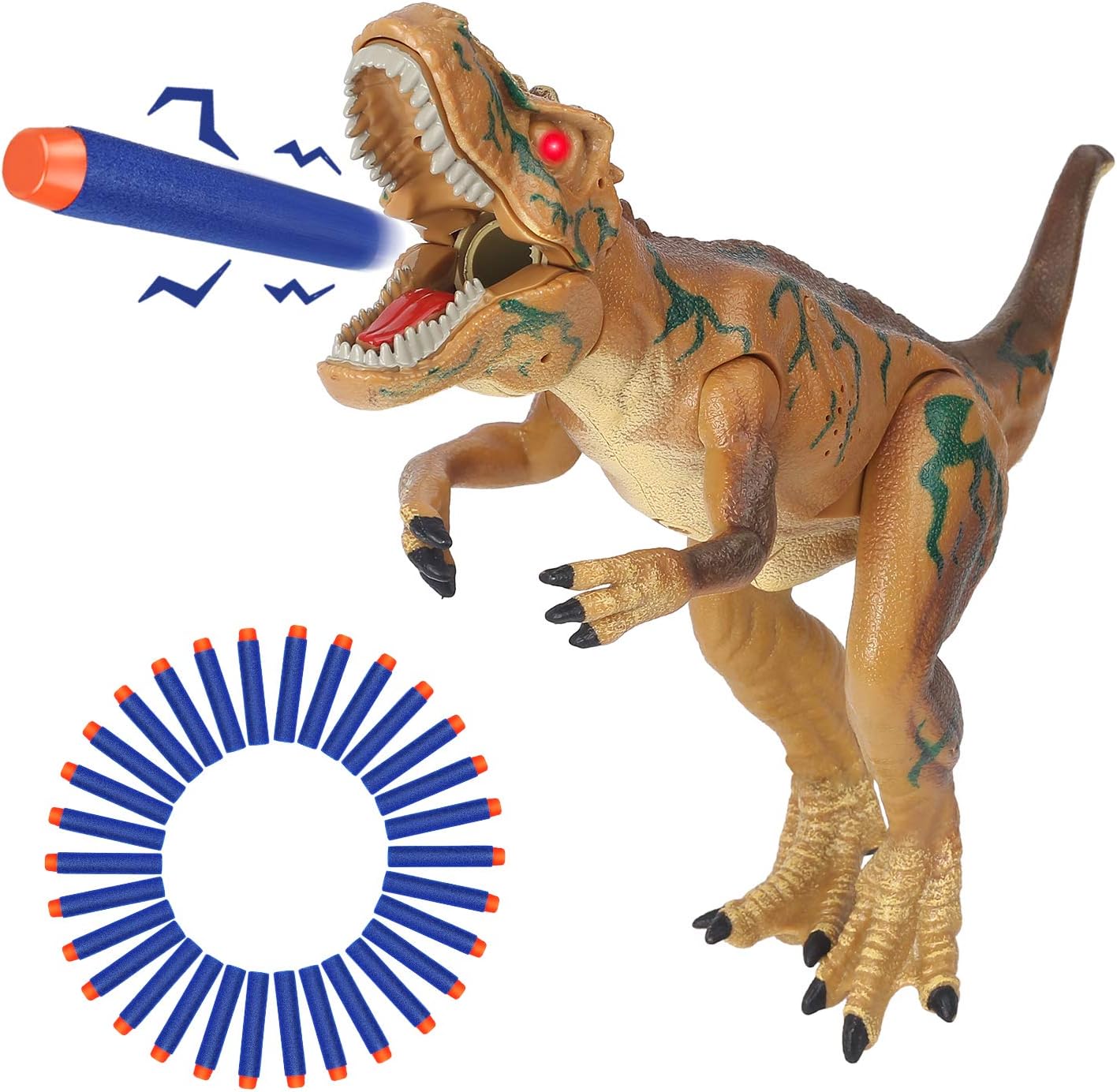 This product is not Fulfilled by Ubuy and can take minimum 10 days in delivery. We might cancel the product from the order and refund you if any issue arise with the delivery of this product.

Note: Electronic products sold in US store operate on (110-120) volts, a step-down power converter is required for the smooth device function. It is mandatory to know the wattage of the device in order to choose the appropriate power converter. Recommended power converters Buy Now.

Write Your Own Reviews

Only registered users can write reviews. Please log in or register

Light and Sound Dinosaur Foam Dart Blaster is sure to delight the child in your life. The eyes and mouth light up and the dino roars as it launches the dart into the air! To use, pull back on the dino's leg, make its mouth open and load the dart. Pull the tail back and let it go to fire. The 6 included soft foam darts are safe and easy to use.

Notes:
For ages 8 and up
Includes button-cell batteries

�
Rated 5 out of 5by Racemom22from Cute toyBought for my grandson who loves Dinosaurs and nerf guns , so it was the perfect present .

Rated 3 out of 5by Brynnalinefrom Kinda CheapI got this for my 2 nephews, product is kinda cheaply made. I will give it to them lucky for me they are young enough not to know the difference.

Rated 5 out of 5by Jbo1823from Looks greatThis is a christmas gift . Dont know how well it works but it's a sturdy feeling product. Only think I would do is maybe more of a pleasant packaging instead of a brown box.

Rated 5 out of 5by LaurieZfrom Very sturdyI bought this for a Christmas gift, so it hasn't been played with yet but the dinosaur is a hard plastic so it should hold up well for a 4 year old

Rated 5 out of 5by LIGHT AND SOUND DINOSAURfrom COOL DINOSAURI BOUGHT THESE FOR MY GRANDSONS FOR CHRISTMAS. I HAVEN'T TRIED THEM OUT BECAUSE THEY ARE GIFTS BUT I KNOW THEY WILL LOVE THEM! THEY LOVE DINOSAURS AND THEY LOVE ANYTHING THAT SHOTS DARTS.

Rated 5 out of 5by Kathyv4000from Works exactly as it should!This was very easy (plus it had very good instructions enclosed as well as batteries!) to use. The noise it makes is great! My Grandson is younger than 8 so he has to have adult supervision but this toy will last a long time.

Rated 5 out of 5by Dixiebelle19from AwesomeI just ordered this for a Christmas present for our great grandson. I opened it to look at it and very surprised. It is bigger than it looks in catalog. I am very well pleased with it.